Hey now, “Icepick James” here, writin’ liner notes again. This time the story is about how we spent two straight weeks eating, drinkin’, laughin’
and tellin’ lies and stories while actually recording a really cool, fresh album for my pal, Peter Nande, or “Big Boy Pete” as I nick-named him a few years ago. In fact, we did so well … the biggest job proved to be pickin’ the dozen or so tunes for this release, out of a 24 item list! That tells you that his next release will certainly be out faster than the four
years it took to get to this one after his last one: “Nande and The Big Difference”, back in 2002. Now you can just slip this tiny platter with the big sound into your favorite music playin’ devise, pour yourself some mellow, mellow wine and join in on the fun, doin’ the Big Boy Boogie ‘til Big Boy Pete hits yo’ town sooner or later! Please kick on back and enjoy this mess to the fullest, my blues lovin’ friends around the world … ‘Coz baby, this stuffgoes down smooth! 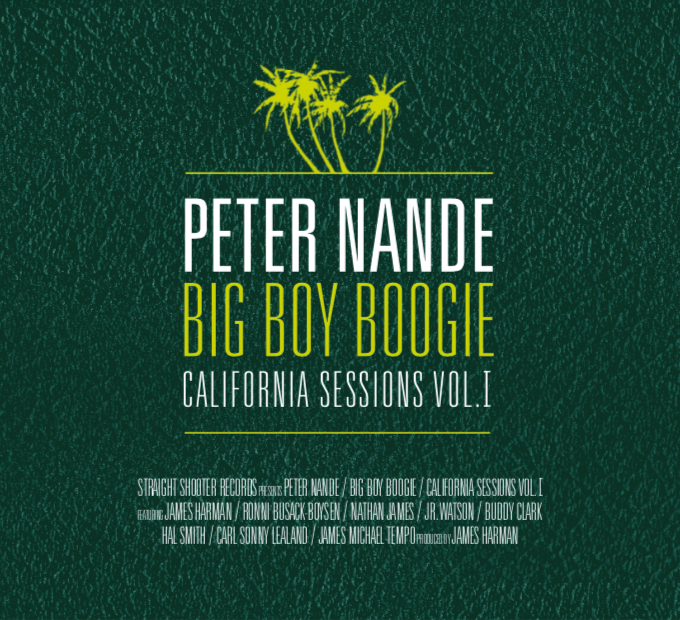 Peter Nande built his reputation as a bandleader backing artists like RJ Mischo, Lazy Lester and Gary Primich on their tours of his native Scandinavia. However he was to make a big impression on one of the artists he backed – a certain gentleman by the name of James Harman.

Harman was so impressed by Nande’s singing and harp playing, he invited him to his home in Southern California, to record and produce an album for him – resulting in the gem under consideration here.

Nande is a wonderful vocalist and harp player – and on this set he demonstrates it – paying tribute to his mentor (Icepick) in the best way possible with a set of great blues. As Harman says “pour yourself some mellow wine – kick on back and enjoy this mess to the fullest .. coz baby, this stuff goes down smooth” – and I won’t and don’t disagree with Icepick.

Nande bought his own guitarist, Ronni Busack-Boysen, to the sessions, and was joined by, amongst others, Jr Watson, Harman alumni Nathan James on guitar, Carl Sonny Leyland on organ/piano, Buddy Clark on upright bass, and, of course the man himself – Harman.

The set kicks off with “Cat Be-Gone”, a swinging instrumental that allows Nande to demonstrate his command of tone, phrasing and creativity over a “slap” rhythm. “Mover & Shaker” mines a mighty shuffle groove mixing elements of Memphis and Chicago in true Harman fashion – Nande’s moody vocals and harp echoed by some tough, shimmering, 50’s styled electric guitar and deep rolling piano. A real gem!.

The rhythm section rack up a deep Delta groove on ‘Comin’ Home” – Nande’s brooding vocals and harp melding the influences of Harman and Rice Miller, the mood echoed by Boysen’s guitar and Leyland’s piano. “She’s Mad Again” finds Nande on his own – just vocals and harp – creating a lowdown gutbucket moan that mixes elements of Sonny Boy, Wolf, Sonny Terry and Harmonica Slim. A real tour-de-force. “Kiss Me Now features Harman on vocals backed by Nande’s superb harp, on a number that recalls Sonny Boy’s Storyville period – “Lucky Charm” has a strong Gene Vincent feel, with Leyland in magnificent form mixing elements of Jerry Lee Lewis and Memphis Slim, whilst Watson lays down some stunning rockabilly guitar in his own quirky fashion.

Nande is a major talent and I could enthuse endlessly over each and every track – all I can say is roll on volume 2 – and whilst you are waiting for it – do “The Big Boy Boogie”.