This new story is similar to the last one – again we spent two straight weeks singin’, playin’, eatin’, drinkin’, laughin’ and tellin’ stories, and came up with another cool, fresh album for our pal Pete. We think you’ll find it to be a lot of fun, but still with that dangerous edge that only low-down, juke-joint blues can bring to the festivities.

Creating this recording was like being at a party with a bunch of old friends. We had everything in place from the last time, so it went down easy once we got started. This time we chose to use Marty Dodson, longtime drummer with Mark Hummel’s Blues Survivor, and he was a force to be reckoned with. We added a swingin’ horn section consisting of Jonny Vaiu and Tony Matoian, and organist Neil Wauchope, who brought along a tone smoother than a tall taste of Kentucky sippin’ whiskey.

Jelly Bean Baby is a 54-minute helping of blues stirred into a program of great dance grooves. I’ll assume you know that when I say dance grooves, I’m not talkin’ no stinkin’ disco or hip-hop, but just some sho-nuff, hip-shakin’, jug-bustin’ th’owdown songs, all performed by our house groove-squad, plus Pete’s #1 guitar man, “Good Rockin’ Ronni” Busack-Boysen. I’m talking about cool, American rhythm & blues, spiced with a taste of Africa and the islands… but perfect for a low-down juke-joint as well. We hope you’ll enjoy listening to it as much as we enjoyed making it for you. 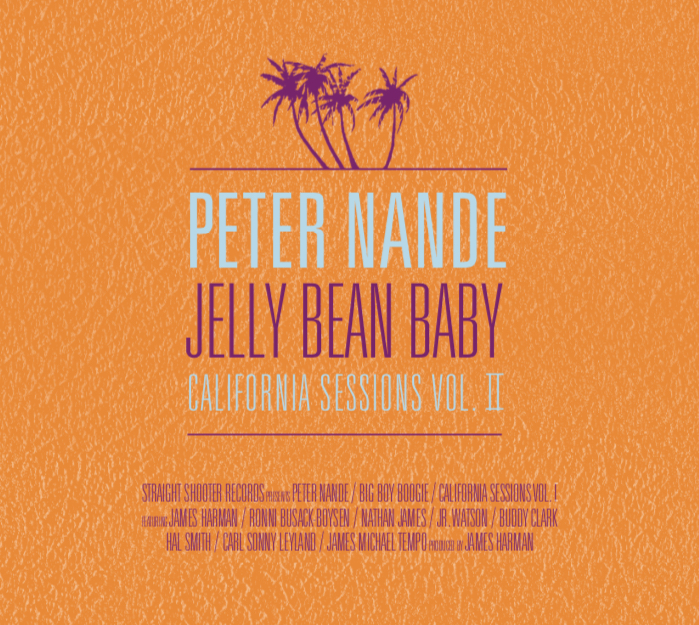 Jelly Bean Baby: California Sessions Vol. II is Peter Nande’s third CD release, and his second recording in three years under the auspices of blues artist and producer James Harman. Like its predecessor, Big Boy Boogie: California Sessions Vol. I (2006), it features a baker’s dozen of distinctive, danceable original blues-based songs. These were written primarily by songwriter/vocalist/harp player Peter Nande, with help from Harman, guitarist Ronni Busack-Boysen and, on one track, organist Neil Wauchope, and recorded with Busack-Boysen and a stellar supporting cast, assembled by Harman.

Jelly Bean Baby expands upon the format that made Big Boy Boogie a success. Nande spins clever tales around the general theme of human desire and its consequences… stories of infidelity, excess, and finding one’s way. Nande isn’t afraid to take his time, telling his stories with a sly grin and anchoring them in the propulsive, hypnotic rhythms and tonal vocabulary of American blues and Caribbean music, flavored with jazzy touches.

Give a listen to “Beware Brother,” a tale of marital caution set to an irresistible groove; check out the reggae-styled double entendre “Slo’ Poke,” or “Ridin’ the Gravy Train,” with its lyric about livin’ the high life, set to a primal Mississippi blues rhythm. Listen to “Walk the Talk,” which condemns a woman’s unfaithful behavior, but moves with such a driving shuffle beat that you can’t help but visualize the same woman shakin’ what her mama gave her; somehow, you know she’ll get away with it. These songs work on more than one level, clearly, and bear evidence of Nande’s artistry, separating him from the glut of blues musicians who are happy simply to regurgitate “Sweet Home Chicago.”

Nande executes his ideas with inspired support from Busack-Boysen, who has played with Nande for three years and has earned a reputation as one of Europe’s top guitar players, and with the guidance of Harman, his creative mentor, and Harman’s crack team of blues artists. These include guitarist/engineer Nathan James, bassist Buddy Clark, percussionist Mike Tempo and others. The songs, primarily, are Nande’s, but they come to fruition only under the care of the entire ensemble.

Here’s the back story: Peter Nande is a Danish blues musician. Born in 1968, he’s pursued his blues quest since age 16 or so, when he first heard the music of Sonny Terry and Brownie McGhee. Fascinated by the harmonica and the blues genre, he devoted a decade to studying such blues masters as Muddy Waters, Howlin’ Wolf and others, as well as working blues artists, including Harman. In 1998 Nande formed a band, Nande & the Big Difference. In 2002 the band released a CD and soon began playing festivals in Europe, often backing top American blues artists.

Nande’s group disbanded in 2005. Nande set his sights on recording in the U.S. with American musicians. The dream became reality in 2006 when Nande and Busack-Boysen flew to California to cut a CD with Harman as producer. Big Boy Boogie was engineered by Nathan James, and recorded in Nathan’s home studio in Oceanside, Calif. The CD was nominated for Danish Blues Album of the Year by the Danish Blues Awards in 2007, and contributed mightily to Nande’s recognition as Danish Blues Musician of the Year for 2007 by the Copenhagen Music Festival. The release elevated Nande’s status in Europe, helping to make the Peter Nande Band an increasingly sought-after act for festival and club work.

During 2007, Harman with his Bamboo Porch trio, including Nathan James and Ben Hernandez, toured Scandinavia for three weeks. Harman gigged at festivals and other shows with the Peter Nande Band and with the trio. “They all stayed at my apartment in the middle of Copenhagen on the Danish part of the tour,” Nande recalls. “We‘re talkin’ fun and blues 24 hours a day for three straight weeks.”

This brings us to Jelly Bean Baby. Nande prepped for more than two months with Busack-Boysen prior to the sessions, which took place over two weeks beginning Feb. 1 in the garage studio of Nathan’s new residence in Oceanside.

“I brought over a bunch of ideas and demo tracks,” Nande explains. “James called his friends and band members to join the session, and Nathan set it all up at his garage studio. James has taught me that it’s important not to prepare too much, as you get the best ideas while you record. The material has to be fresh and interesting to the musicians – then they give their best.”

Harman helped break the ice as the sessions began, “tellin’ stories and makin’ everybody laugh,” Nande says. “One of his secrets as a producer is that he makes everybody feel good and have a great time while they record. He’s not just producing the music and songs, but also has the important ability to bring out the best in every musician and make everybody feel relaxed.”

However, to coax out Nande’s full potential, Harman sometimes took a less casual approach, one that was at times bluntly honest and demanding.

“James always tells the truth and it can be painful,” Nande says. “He’ll let you know right away what can be better… He knows I’m a fighter and a go-getter, so too much sweet talkin’ doesn’t work on me, but criticism and good coaching works.

“Sometimes he’d say, ‘Shut up and listen! Pay attention and learn!’ Then he’d tell me stories about the old blues masters – Muddy, Sonny Boy, Wolf and more, quite a few of whom he met and played with – and how they lived their lives in the old days. He tried to get me in the right mood so I could tell my stories, sing my songs, with the right feeling.”

While Harman tended to the performances, Nathan James took charge of capturing them for posterity. He again engineered the sessions, arranging vintage mics and amps in the small wooden garage. The space did not have a good natural sound, Nande says, but Nathan knew how to position the mics for the best tone and separation. “He placed amps in different places in his house – some in the bathroom for that cool echo effect, and some in closets.” Later, Nathan mixed the recording, with help from Harman and Nande, and did the mastering as well.

The basic tracks took about four days to record, cut live with Busack-Boysen or Nathan James (or both) on guitars, Clark on bass and Marty Dodson on drums. “Marty has backed all the harp guys doing the Blues Harp Meltdowns,” Peter said. “He’s the best ‘harp drummer’ there is, and is a funny, great guy.”

Harman describes Nathan James and Buddy Clark as “the best and most focused musicians I’ve ever had the pleasure to work with… When I’m trying to make the magic happen as a producer, so it sounds like it ‘just happened’ and doesn’t sound over-produced, I lean on Nathan’s and Buddy’s ridiculous natural abilities to instantly hear what should go where, and on their good-natured willingness to try as many different things as I can come up with until we all hear the right one happen together. It never fails.”

In addition to Nande, Busack-Boysen and Harman’s blues team, organist Neil Wauchope joined in for the third and fourth days of tracking. Nande had heard him on recordings, loved his feel and wanted him on the CD. He had Wauchope fly in from Atlanta, where he now lives, to take part in the sessions.

The basic tracking was followed by a week-and-a-half of overdubs. Nande wanted horns on some tracks, so Harman called his tenor sax buddy Jonny Vaiu, who brought Toni Matoian from Chicago to add baritone sax. They arranged the horns on the spot. “The arrangements sound so fresh and natural,” Peter says. “Nathan made ‘em sound so good and James had so many cool ideas for horns.”

Mike Tempo added percussion, and Nande, Busack-Boysen, Harman and Nathan James added vocal and instrumental parts. Ben Hernandez came by a few times to hang out and Peter asked him to put backing vocals on a couple of tracks. Pianist Carl Sonny Leyland, vacationing in England, couldn’t make the session, so he recorded the piano parts remotely from his parent’s house in England and sent them by e-mail!

The last night of Nande’s California expedition ended with a concert by the James Harman Band at the Café Boogaloo in Hermosa Beach… a fitting wrap to two blues-drenched weeks.

Nande returned to Denmark knowing that his blue journey is ongoing: This summer he’ll cut a duo album with guitar/vocal partner Tim Lothar, to be produced in Copenhagen by Harman. He also plans work with U.K. musician Big Joe Louis; and, in 2010, California Sessions, Vol. III.

While he knows he still has a lot to learn, Nande has come a long way: Three years earlier, he had a dream of working with American blues musicians. With his second volume of California sessions behind him, his progress is there for all to hear. Whereas once he showcasing instrumental prowess, his emphasis now is on the songs themselves.

“Now I focus on lyrics, on the story I want to tell,” Nande says. “You won’t find too much harmonica on this album because I found other instruments that tell the story in a better way. You won’t find many harp players doing that. Gary Primich once said to me, ‘The better I’ve become on this little silly instrument, the less and simpler I play.’

Just listen to Jelly Bean Baby, and you’ll hear where he’s going. “On these tracks, you’ll find laid-back, cool grooves that are easy to dance and listen to. You’ll find lots of air and space in the songs, and musicians playing to the songs and playing together, not trying to show off… well, maybe just a little,” Nande says, with a laugh.

Golden state of mine – wish I could turn back time
Well, I enjoyed the ride – good friends by my side
Califonia, I gotta go…
We all had a good time…