Two For The Road

I’m here to tell you ’bout a special »side project« I’ve produced for my Danish buddies Peter Nande and Tim Lothar. Many of you know Peter as the harmonicaplaying front man of The Peter Nande Band. Tim Lothar is the band’s drum – mer, and as such is a rare, wonderful, ex – tremely musical player. But he’s also a sing – er and guitar player, and together Tim and Peter create authentic-sounding country blues. Yeah, I know: I’ve seen several really good sit-down retro blues duos lately in a dozen countries myself, but I think our boys here really have somethin’ special goin’ on. Tim’s signature guitar style blends pure Mississippi Delta slide guitar with Piedmont finger pickin’ and a taste of Deep Ellum/ North Texas. His singing combines moody, melodic chanting with an incredible, natu – ral vibrato, plus old-time jump-up th’owdown country preacher ranting that you won’t often hear. Peter, Copenhagen’s favor – ite son, sings his share of his original blues songs and offers a healthy dose of that pat – ented, sexy harmonica that he’s known for. Tim and Peter love performing as a duo just as much as playing with the whole band. Here they present twelve songs that feature their talents as country blues artists. This is not as powerful as the Peter Nande Band in full swing, but it sure is fun. These two artists have won several national awards for their recordings and perfor – mances, so they bring much to the party. I had the pleasure of producing Peter’s last two studio albums and it was a solid gas working with them on this one as well. They asked me to sing a song for this release, so I chose my song, »You Got To Choose.« Oh, and as to that crazy spoken word business called »Pa-tainin’ ta’ jookjernts,« I should explain that was my reenactment of a set of drunken directions I received from a fellow standing on the roadside in Mississippi, back about 1967! If you’re reading this, you’ve already made the financial investment and personal com – mitment, so pour yourself a tall, cool one and relax … put your feet up, wiggle your toes a little and let your mind jump that old rusty boxcar with »Lonesome Tim« and »Big Boy Pete.« Take that rough ride on down to Goatman Holler, to the track-side jungle where sad men get happy and happy men get sad … you’re just reading about it now, but slide that compact disc into your machine and feel the blues … go on, take that lonesome hobo ride. Thank you baby!

Tim Lothar & Peter Nande – Two For The Road
In 2008, Lothar and Nande began playing gigs as a duo, laying the groundwork for their CD release, Two for the Road. Guided by producer and guest artist James Harman, the CD showcases the pair’s songwriting gifts (on nine original songs), instrumental fluency and love for country blues. It’s an impressive introduction to what this duo is capable of right now, and hints at what it just might become in the years ahead.

This is foot-stompin’, front porch stuff, featuring nine original tunes and three tasty covers that showcase each man’s gift for capturing the currency of a vintage musical style.

Two for the Road finds Lothar and Nande wielding primal tools of the trade – the human voice, guitar, harmonica, washtub bass, and feet, made for stomping – to craft music that is true to another time and place, but also true to human experiences that are timeless.

Listen to the elegant »Poor Boy«, for example, and you can almost hear the crunch of worn, leather-soled shoes, walking step by step over gravel roads, almost taste the dust and feel the relentless sun on the back of your neck.

Hear the restless mix of hope and regret in »Done Left You« – regret and lament in the lyrics, hope in the prospect of a new start – set to an infectious Bo Diddley groove. Hear the anticipation in the hard-driving »Slow Train«, as a man awaits his lover’s return: »There’ll be no more blues, no more feeling sad, I feel so good, my girl is coming back …«

It makes sense that this would work: Guitarist/vocalist Tim Lothar was named Blues Artist of the Year at the Copenhagen Blues Festival in 2008. Harmonica player/vocalist Nande had won the same award in 2007.

Lothar has years of experience as a drummer, currently drumming in Nande’s band. He brings a rhythmic constancy on guitar, drums, foot-stomping and percussion that is essential to a successful acoustic duo.

Nande’s harp work, influenced by the likes of Sonny Boy Williamson (Rice Miller), »Little Walter« Jacobs, »Big Walter« Horton and others, is resplendent in this acoustic milieu. Listen to his tasteful, slinky lines on »Rough Ride« and on James Harman’s »You Got To Choose«. Impeccable. 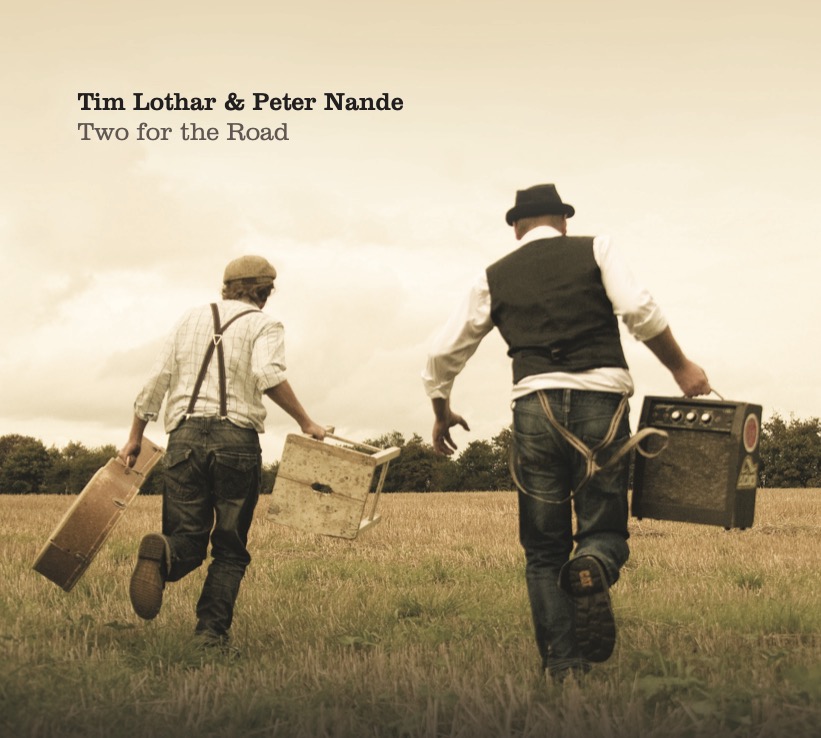 California-based producer and blues artist James Harman, in fact, is the producer of this recording, as he was on Nande’s band releases Big Boy Boogie: California Sessions Vol. I (2006) and Jelly Bean Baby: California Sessions Vol. II (2008). Drawing on a career that began in 1962, Harman knows what to do and what not to do to create a great blues recording with an authentic vibe, and brings out the best in artists he produces.

On Two for the Road, he’s done it again. He also co-wrote two of the songs here, and sings on three, including the irresistible »Pa-tainin’ ta’ jook-jernts«, in which he recreates a set of drunken directions he received from a fellow standing on a Mississippi roadside, circa 1967.

Harman wouldn’t invest his time in artists or in a project that he didn’t believe in. »I’ve seen several really good sit-down retro blues duos lately in a dozen countries myself,« he writes in the CD liner notes, »but I think our boys here really have somethin’ special goin’ on.« Indeed